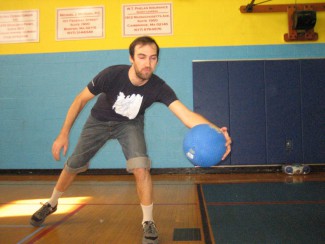 Dear Sean,
We’ll be coming to the 2009 World Championships from Pennsylvania and we want to get the rules right so we have time to practice them. We have been playing a very extreme version of four square for the past 5 years and have recently tried to change our game to practice. First, if you hit the ball and it touches any part of your inside line, albeit a centimeter of it, are you out? Second, is there any spiking rule in the men’s league that you play or are you allowed to spike it as hard as you want? Is this frowned upon in competition? Third, is blood on the serve only when the serve is unreturnable or also when the receiver plays a shot off the serve that is unreturnable. Fourth, how is a showdown actually performed? Who serves the ball and does the server have to be in a certain square? Do the people competing in the showdown have to be in a specific square, say, horizontally rather than adjacent?

Thanks! Great job with the site and we hope to see you at the World Championships! - Dan F.

Dan, it's good that you are asking these questions now and giving yourself time to train for the Champs in advance. We're doing the same thing here in Boston, setting aside a few hours a day for sprints and calisthenics and whatnot. In fact, I only have a few minutes between my lap pool time and a scrimmage in order to choke down a power bar and get a few emails off. Let me bang out some answers while I have the time.

1. If you hit the ball and it next lands on one or any of the inside lines, the you would be out. We do it this way so that there is no confusion on the part of the other players who that ball was intended to reach. Put the ball cleanly into another square or face the music.

2. There is no restriction on spiking, but there are limitations on accuracy when it comes to brute force. The dudes in our league spike a lot, but it only works out for them 50% of the time. We find that clever play is a more successful tactic.

3. The serve is meant only to put the ball into play. So if the serve is to high, low, fast, etc, then do it again. It's really the person receiving the ball that is in control of the first play and they can do whatever they like.

4. The showdown is meant to settle the argument as to who was in or out. It doesn't matter which squares they are in, but you play from the square where you started the round. Sometimes this puts you next to your opponent, sometimes diagonally across. And the highest square serves the ball.