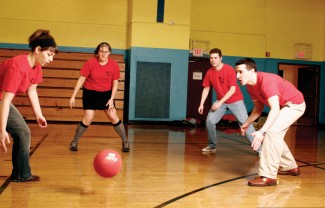 We have established this standard of clear and concise four square game rules over a decade and more of court time and shared experiences. These standards make it possible to learn and enter play faster, have more in common with other communities playing the game, and create a jumping off point for players to experiment and improvise.

The object of the game of four square is to eliminate players in higher squares so that you can advance to the highest square yourself. Four square is played with a rubber playground ball on a square court with four players, each occupying a quarter of the court. The ball is bounced between players in squares until a player makes an error and is eliminated. Eliminated players leave the court, all players advance to fill the empty squares, and a new player joins at the lowest ranked square

First, read about what kind of ball is allowed in the Gear section.

During play, players may only hit the ball with their hands. We describe the "hands" as any area between the player's wrists and fingertips, including the backs of hands. The ball may be hit with open or closed fists in the same manner as official volleyball. Players may not catch, carry or hold the ball at any time during play. Spinning the ball is allowed as long as the hit that produces the spin is not a carry or other illegal hit. We get a lot of questions about spins.

In all cases, players who strike the ball incorrectly are eliminated. 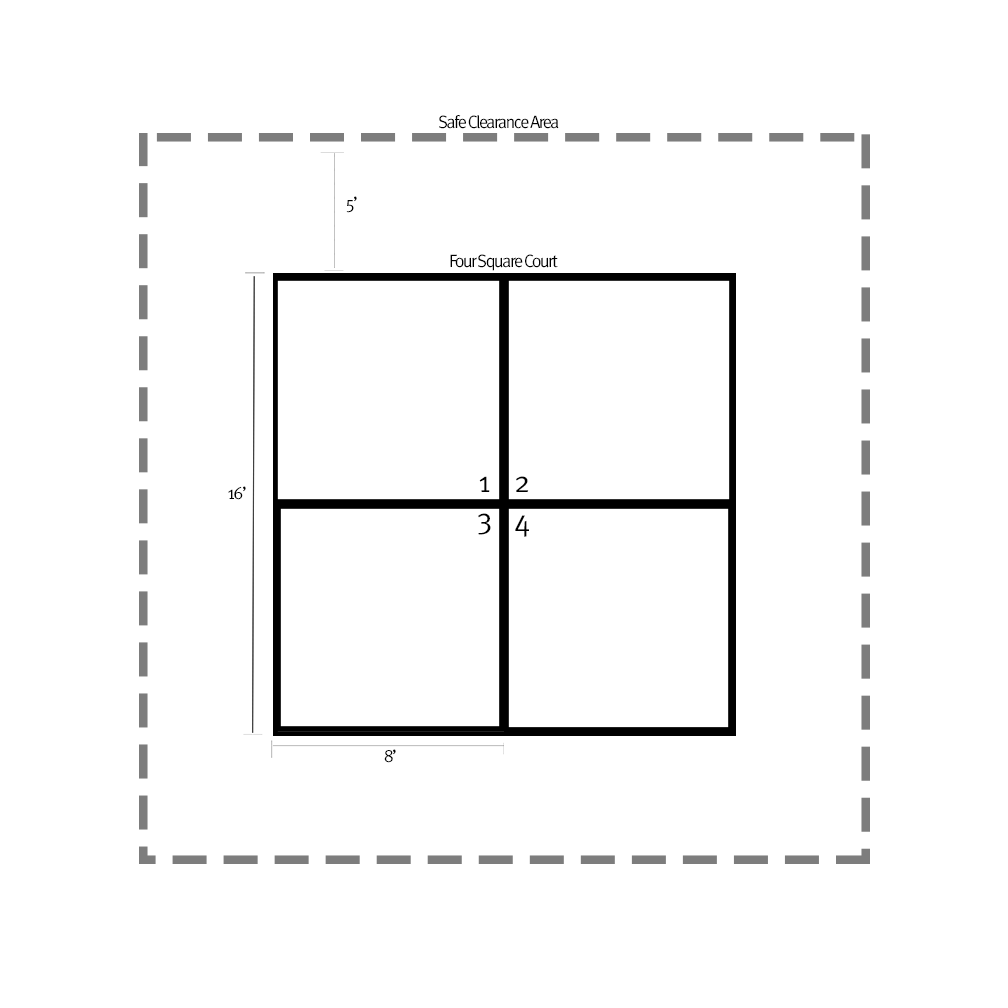 First, read about the dimensions and materials of the court in the Gear section.

Squares are ranked from highest to lowest. Our league uses numbers 1 through 4, other people use letters and even a few use the title of royalty. In all cases, the highest and lowest ranked squares should be diagonal from each other.

Players are not required to stay in their portion of the court. They may stand, walk, or run anywhere on the court, though it is best to stay in a position to protect their own square.

The ball is always served from the highest ranked square to the lowest square. Squares 1 and 4 are positioned diagonally across the court. The server must drop the ball and serve after the bounce. The ball must be allowed to bounce once in the receiving square, then the receiving player must hit the ball into another square. After the receiver touches the ball, the ball is in play.

Serves are meant to place the ball fairly into play. Because the server must serve the ball the same way each time, it is the receiving player who controls the first play of the game.

We refer to a fault as "one bad", as in one bad return. However, if a player faults the second time then it we call it "two bad". In other words, that is too bad for you.

The normal order of play is defined in two stages for each time the ball is hit by a player.

If a ball has bounced in a square and a different player hits the ball before the owner of the square hits it first, the other player is considered out. This is called Poaching.

Each time a player is eliminated, that player leaves the court and all players advance to the higher numbered square squares. The lowest ranked square is then filled with a new player. All eliminated players leave the court and wait for their next turn to join in the lowest square.

These situations represent all the ways in which a player may be eliminated from the court. Players are eliminated for:

If the ball is touched by another object which is not one of the four players or the floor, this is called interference. The round is started again. Players waiting in line may not touch the ball when in play.

If there is a dispute that cannot be settled by the officials then the only proper way to work out the disagreement is through the Showdown. The Showdown is mini-game of two square. The higher numbered square serves the ball to the lower square. The loser is knocked out of the game. In the event of a Showdown, there are no points or errors logged for the players, the winner of the showdown is simply allowed to stay in the game.

Many of the special, silly, and ridiculous rules would make it impossible to keep score in competitive game play so we don't include them on the Official Rules of Four Square. But we certainly should point you to the Massive Collection of Really Cool Rules for you to peruse for ideas for your own court.

Should you have questions or need clarification on any aspect of the standard rules here, please contact us!